The Responsible Homeowner Refinancing Act of 2013: An Introduction 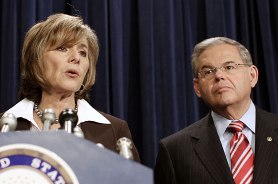 On February 7, 2013, United States Senators Robert Menendez (D-NJ) and Barbara Boxer (D-CA) reintroduced into Congress a bill that would make it possible for responsible homeowners across the nation to refinance their current mortgages at significantly lower rates.  If the bill is passed, millions of homeowners could potentially save thousands of dollars each year.  The bill would remove many of the bureaucratic hurdles that prevent homeowners from refinancing their loans.

In his State of the Union Address just five days after the reintroduction of this legislation, President Barack Obama voiced his unequivocal support for the bill, urging Congress to rally behind it.  Obama stated emphatically that “Too many families who have never missed a payment and want to refinance are being told no.”

The Responsible Homeowner Refinancing Act of 2013, if passed, would impact only those borrowers whose loans were backed by Fannie Mae and Freddie Mac.  However, of those nearly 12 million homeowners, approximately 2.9 million would potentially benefit from passage of the bill, according to Mark Zandi, chief economist at Moody’s Analytics.  The overall savings for borrowers would equate to approximately $7.3 billion each year.

“This is a win-win-win,” claimed Senator Boxer in explaining her support for the bill.  “Homeowners will have more money in their pockets, Fannie and Freddie will see fewer foreclosures, and the housing market and economy will continue building momentum.”

If passed, the bill would also extend the Obama administration’s Home Affordable Refinance Program (HARP), introduced in 2009, by one year.  That program saves the average homeowner about $2,500 a year, largely through the reduction of fees that the Responsible Homeowner Refinancing Act of 2013 would allow to be waived altogether.

President Obama addressed the need for legislation to help homeowners refinance their mortgages in September 2012, through his weekly address video released by the White House.  You can watch the video below.

If you have any questions about your rights and options as a homeowner in distress, we urge you to contact Fast Home Help today.