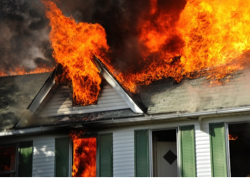 The odds of a fire destroying your home may be low, but they aren’t impossible. Whether the result of wiring issues or a forest fire, your home and belongings could sustain serious damage. If you encounter a fire, the first thing you should do after the fire department extinguishes the blaze is contact your insurance agent. From there, you can receive tips on protecting the remains of your home from further damage or exposure to the elements. The damage your property sustains will depend on the type of fire damage, which is divided into six classes.

1. Class A Fire Damage: Fire damage from a Class A fire is the result of a fire involving flammable solids, including, various plastics, paper, rubber, wood, and cloth.

2. Class B Fire Damage: Class B fire damage consists of damage as a result of flammable liquids or solids that can become liquefied. This includes gasoline and various forms of petrol, oil, various waxes and plastics, and paint. However, fires caused by cooking oils and fats don’t count as Class B.

5. Class E Fire Damage: Class E is fire damage that results from the factors in both Class A and Class B. The difference being, Class involves the introduction of electrical elements, which makes fighting the fire and the resulting damage very different from Class A and Class B.

6. Class F Fire Damage: Class F is a fire that results from cooking oils and fats. This type of fire differs from Class B because these fires are significantly hotter and the damage more severe.

Along with the six types of fire, most insurance companies divide fire damage into two broad categories: primary and secondary. Primary fire damage refers to damage that occurs as a direct result of the flames, including damage to the building and contents of both residential and commercial businesses. Secondary fire refers to damage that occurs due to smoke and corrosive substances released by the fire. In some cases, secondary damage can account for the vast majority of damage in a building or home. Furthermore, a fire exposes the home to the elements, which means a rain could add water damage to the mix.